The Order Of The Black Shamrock®

Order Of The Black Shamrock

The Order of the Knights of the Black Shamrock is a good and noble Order ordained and established on this day 19 November, in the year of our Lord 2008.

The aims and goals of this order are to promote and uphold the virtues of the Noble Warrior, the undying worth of the ideals of chivalry, and to espouse the value and worthiness of these ideals to those who would take interest in them. Members of the Order are entrusted with the noble charge of passing this legacy to the next generations, our youth, our sons and our daughters. The mentoring of the next generation through deeds and by the example of these noble ideals shall be among the most revered and honored that a member of the Order of The Black Shamrock can enjoin. This is a sacred trust and a noble duty entrusted to all who are members. Not all who feel compelled to join this order need be required to fight with fist and arms as there are those whose voice, words, and deeds are their sword and shield and are the most valued in their time of need. For there are times when a sharp wit and a pointed pen are more telling than a sharp blade or a true aim.

A warrior is one who stands against the tide of public opinion and self compromise whose cause is just and right. He is willing to fight in the best manner unto each man, against evil, tyranny, and injustice. And, he will continue to fight even if alone against overwhelming odds, for his will is strengthened by truth and righteous conviction, knowing also, in his heart of hearts, that a man who stands with his convictions never stands alone.

If you are one of such standards and ideals then the Noble Order of The Black Shamrock will welcome you to its ranks.

JOIN THE ORDER OF THE BLACK SHAMROCK HERE 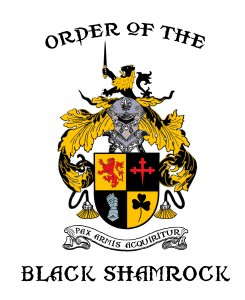 Since time immemorial, warriors have always held a revered, honored and respected place in society. In spite of all political meanderings and the ebb and flow of societal values, this has never changed and it never will. There is an honor and pride in joining this brotherhood that can be gained nowhere else, and once joined can never be taken away. Although women are not excluded, it has always been the man’s role to be the protector and provider. This is your responsibility and your role to uphold and honor in your time upon this earth.

The responsibility of a warrior does not merely necessitate the taking up of arms against an enemy. It is more, much more and it is such that you become an example, a role model of ethical and moral behavior to all others who may look to you for guidance or protection. If this is the path in life that you have chosen to walk then know that it is a path well worn by the footsteps of those who have walked here before you. Others, who have willingly said; I will endure the hardship, the pain, the sacrifice and the risk of death so that those who sleep soundly in their beds can do so in the warm embrace of safety and peace.

If this is your choice then know that your road will be fraught with adversity and you will be assailed by many, but in those times, remember that you are in the company of the noble souls who have also faced such adversity and prevailed. And know also that your legacy shall be that until the end of time, as the last sunsets upon this earth, in that blackest night, somewhere a warrior still stands his lonely watch.

You can find out more about which cookies we are using or switch them off in settings.

This website uses cookies so that we can provide you with the best user experience possible. Cookie information is stored in your browser and performs functions such as recognising you when you return to our website and helping our team to understand which sections of the website you find most interesting and useful.

Strictly Necessary Cookie should be enabled at all times so that we can save your preferences for cookie settings.

If you disable this cookie, we will not be able to save your preferences. This means that every time you visit this website you will need to enable or disable cookies again.

This website uses Google Analytics to collect anonymous information such as the number of visitors to the site, and the most popular pages.

Please enable Strictly Necessary Cookies first so that we can save your preferences!